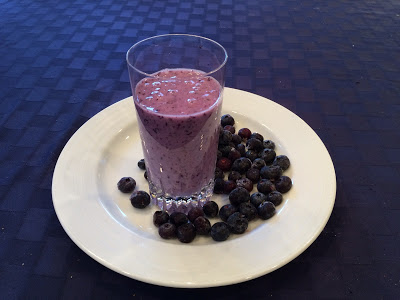 Last time I posted a smoothie recipe, it was when my youngest daughter got braces.

Apparently dental issues are a harbinger of smoothie recipes on this blog, because the same girl had a wisdom tooth out on Friday. Since then I haven’t made anything that didn’t go through a blender, including this smoothie that’s bursting with the taste of blueberries. I made a noticeable dent in the number of blueberries in my freezer, since this was one of the few things she wanted to eat after her surgery.

For the record, the surgery went well, and she’s already back at school to write her final three exams. It’s hard to know which she thought was the worst thing about the last few days: the removal of the wisdom tooth, the fact that it was bookended by exams, or the two losses by her beloved Blue Jays to the Red Sox. Fortunately, the mouth is healing, the schoolwork is coming along nicely, and the Jays won this afternoon.

Three great reasons to celebrate with another smoothie! 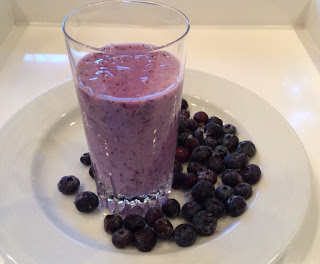 Combine all ingredients in a blender and blend until smooth.
Makes 2 medium-sized smoothies.