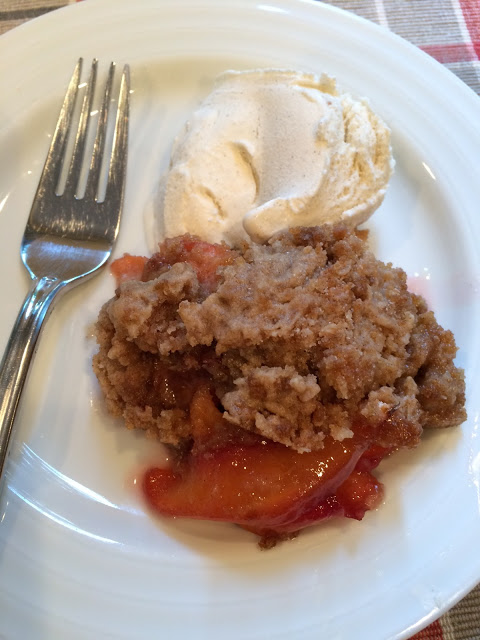 I was inspired to bake this nectarine crisp after reading Ruth Reichl’s My Kitchen Year. (If you haven’t read it yet, do yourself a favour and pick it up. It’s excellent as both a cookbook and a journal of the former editor of Gourmet magazine’s first year after the magazine shut down.)
She described visiting the farmers’ market in September, picking up “the last lonely nectarines, rosy but hard as rocks,” and baking them into a galette. Before reading that, I had no idea you could bake unripe fruit into a dessert; of course I had to try it out. At my local market, I stopped at the bin of nectarines (which were indeed rosy but hard as rocks). I baked mine into a crisp rather than a galette: served with ice cream, it was a perfect dessert for the last fleeting days of summer.

Nectarine crisp
(inspired by My Kitchen Year by Ruth Reichl)
Note: this would also be lovely made with peaches
Ingredients
4 unripe nectarines (5 if they’re small)
2 Tbsp flour
1/2 cup sugar
juice of 1/2 lemon
3/4 cup flour
6 Tbsp brown sugar
3 Tbsp white sugar
1/4 tsp cinnamon
pinch of salt
6 Tbsp cold butter
Slice the nectarines (you should have about 3 cups). Toss them with 2 Tbsp flour and 1/2 cup sugar. Squeeze in the lemon juice and give it a stir. Let them sit and macerate for at least 45 minutes.
In the meantime, prepare the crisp topping by combining 3/4 cup flour, brown sugar and 3 Tbsp white sugar until thoroughly mixed. Add cinnamon and salt. Cut in butter until mixture is crumbly. Set aside.
When the nectarines are done macerating, pour them into a small buttered casserole dish. Top with crisp topping and pat gently into place. Bake at 375 degrees for 30 minutes.
Serve warm with ice cream.