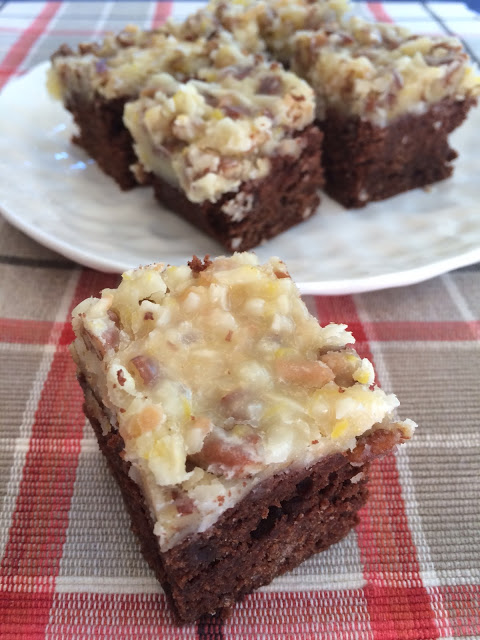 This delectable variation uses brownies rather than cake, and tops it with the traditional frosting. I always seem to have a few ounces of unsweetened chocolate sitting in my cupboard, and this is a wonderful way to use it up. Make sure you don’t overbake these brownies: a fudgy base is perfect for the sweet frosting that ties it all together. 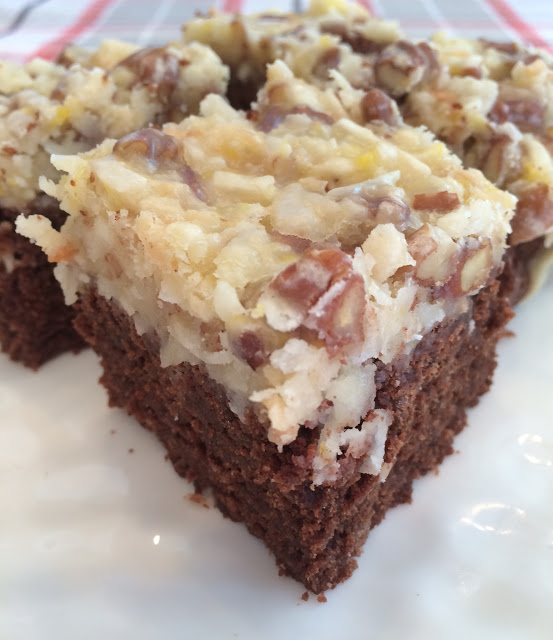 To make the brownies:

Melt unsweetened chocolate and 3/4 cup butter together over a double boiler. Let cool for 10 minutes.

Spread the batter in the prepared pan and bake for 30 – 35 minutes. Don’t overbake – these brownies should be fudgy and slightly undercooked. Leave the oven on after you remove the brownies so you can toast the pecans and coconut.

To make the frosting:

Spread chopped pecans in a loaf pan, and spread coconut in a second loaf pan. Place in preheated oven, toasting the pecans for 8 – 10 minutes and the coconut for 5 – 10 minutes. You’ll want to stir them every 2 – 3 minutes so they’re evenly browned. (Alternatively, you could just use one loaf pan and toast the pecans and coconut back-to-back.) Remove each from the oven as they’re golden brown and let cool.

In a large saucepan, combine half-and-half, 1/2 cup sugar, egg yolk and 4 Tbsp butter. Cook over low heat, stirring constantly, until thickened (about 5 – 7 minutes). Remove from heat and stir in vanilla, pecans and coconut. Spread on brownies while still warm.