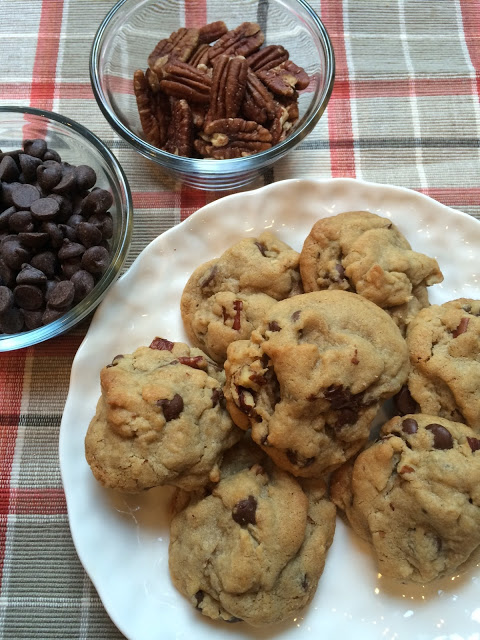 Truth: there is no such thing as too many chocolate chip cookies.

Brown butter makes everything better – amirite? And normally I don’t put nuts in chocolate chip
cookies, but here the pecans set off the brown butter perfectly.

Chocolate chip cookies are one of the first things I remember baking as a little girl helping my mom in the kitchen. They were one of the first recipes I learned to bake as a young woman living on my own. They were always one of my favourite recipes to bake with my daughters when they were young. And even though I’m not really a chocoholic, I’ll always have a special place in my heart for chocolate chip cookies. No matter which recipe I use. 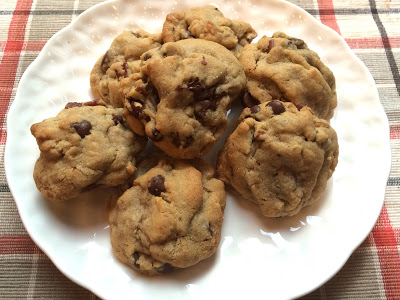 In a medium bowl, whisk together flour, salt and baking soda. Set aside.

Brown 1/2 cup butter in a pot over medium heat. Once it has browned, pour it into a small bowl and let cool for 20 minutes.

In the meantime, cream remaining 1/2 cup of butter with brown sugar in the bowl of a stand mixer. Beat on medium speed until light and fluffy, about 3 to 5 minutes. Add vanilla extract and molasses, and beat until incorporated.

Once the brown butter has cooled slightly, pour it (brown bits and all) into the creamed butter and sugar mixture. Add the sugar and beat for 2 minutes, until well-incorporated. Add the egg and egg yolk, and beat for 1 minute more.

Stop the mixer and scrape the bottom of the bowl to ensure that everything is evenly mixed. Remove from mixer. Add the flour mixture and stir until the flour is just incorporated. Stir in pecans and chocolate chips.

Cover with plastic wrap and let rest in the fridge for at least 30 minutes.

Bake for 12 – 14 minutes, until golden brown. Remove from the oven, let rest on the baking sheet for 5 minutes, then remove and let cool.