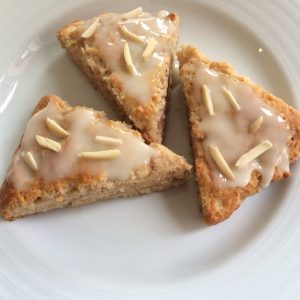 A pride of lions, a herd of cattle, a flock of sheep. Is there a word for a large number of pears?

Whatever the word is, I recently had one on my counter, and it made me very happy. Once I’d made the usual muffins and crisps, though, I still had a couple left over. I needed another recipe before they over-ripened.

I found this scone recipe in the deep recesses of my bookmarks. Adding pears to scones wasn’t intuitive, but I loved the way they were partnered with almonds. And scone recipes are so quick and easy, I knew they’d be ready in no time.

The flavours worked as well as I hoped. With the sweetness of the glaze, they make a perfect teatime treat – maybe even breakfast, if you’re in the mood for something sweet. I think they’d be lovely even without the glaze.

And I’ll make them again, the next time I’m the owner of … an abundance of pears.

Combine flour, baking powder, sugar, salt and cinnamon in a large mixing bowl. Cut the mascarpone cheese and butter into the flour mixture until you have coarse crumbs. Mix well and set aside.

In a medium-sized bowl, whisk together egg, milk, almond extract and honey.

Make a well in the centre of the flour mixture. Pour in the egg mixture and the diced pear. Gently stir until the dough forms together, then turn it out on a piece of parchment paper placed on a flat surface. Knead it a few times, being gentle to avoid squishing the pears. Flatten into an 8-inch round and transfer dough and parchment paper to a baking sheet. Score into eight equal triangles.

For the glaze, combine powdered sugar, honey, and almond extract. Add milk until desired consistency is reached. When scones have cooled completely, drizzle with glaze and sprinkle with sliced almonds.