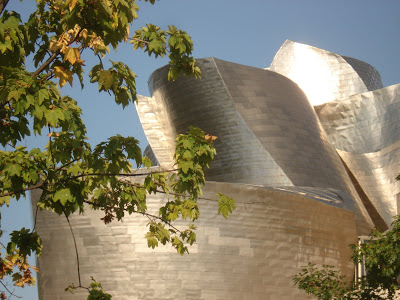 One of the exciting aspects of traveling is visiting great buildings that are unlike anything you’ve seen anywhere else.  This month, I’ll tell you about some of that amazing architecture, and I’ll start by writing about the Guggenheim museum in Bilbao, Spain.
When the Basque region of Spain was revitalizing itself in the late twentieth century, it hired Frank Gehry to build a museum.  He responded with a titanium and glass masterpiece that was almost shockingly unlike any other.  When it opened in 1997, I saw photos of it everywhere.  I don’t know much about architecture, but I was captivated by this building that was so unusual, it was difficult even to describe.  Some people say it resembles a spaceship that landed by the water and never left; others describe it as an otherworldly boat.  Either way, it’s hard to take your eyes off it. 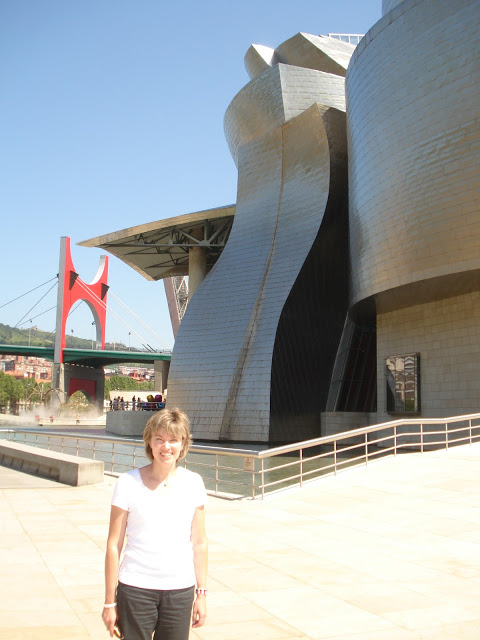 After admiring the Bilbao Guggenheim from afar for over ten years, it was a thrill to visit it in 2008.  My oldest daughter reminded me that as we walked around its perimeter, it seemed to change colour depending on the angle and the time of day.  Because of the swooping curves of the building, the reflecting pools of water, and the river that runs beside it, at times the building almost seemed to float, as if it wasn’t really bound to the earth.
Inspired by water, transformed by light, the Bilbao Guggenheim is a triumph of architecture and a joy to visit. 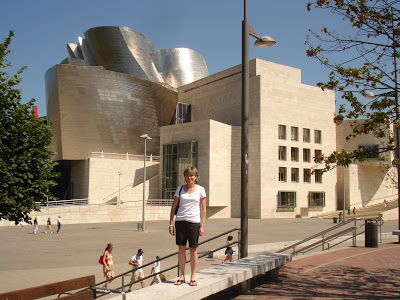