Recipes inspired by musicals.  Apparently, this series has become a semi-annual feature on my blog.  I will never run out of musicals to write about, nor far-fetched ways in which they remind me of food.
Take Man of La Mancha.  This is the first musical I’ve written about that I’ve never actually seen, but it inspired one of the biggest crossover musical hits ever, “The Impossible Dream”.  When I hear it in my mind, it’s always sung by Robert Goulet.  But it’s been performed by an enormous and varied list of performers, including Merrill Osmond, Cher, Jacques Brel, Jim Nabors, George Foreman and the Mormon Tabernacle Choir.
I’m guessing no other piece of music could make the same claim. 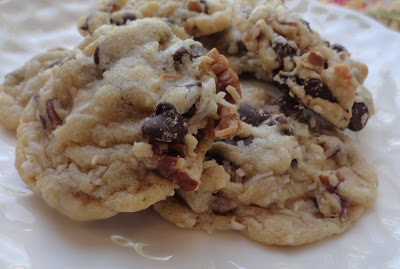 Man of La Mancha is based on the book Don Quixote, so any reasonable person would use that as an excuse to feature tapas, or paella, or even chorizo.  But why would I be so literal-minded?  I was inspired by the title of this song, and imagined what might be an impossible dream when it came to food.
The answer came pretty quickly.  You know those chocolate chip cookie recipes that suggest you refrigerate the batter for 48 hours before baking?  I always chuckled when I read those instructions.  As if, I thought, anyone could keep cookie dough in the fridge without baking (or eating) it.
So that was my challenge.  This recipe calls for the dough to be refrigerated at least three hours, which seemed impossible enough.  I made it on an afternoon when everyone else was out of the house, and I could busy myself doing other things for three hours.  Then I baked half the dough into cookies.  They were breathtaking.
I hid the rest of the dough in the fridge in the basement.  For two days, I went about my business in the house, pretending that I didn’t know about cookie dough just waiting to be enjoyed.  It was hard not to be distracted.
And 48 hours later, I baked the rest of that dough into cookies. They were sublime.
Whether or not you can last 48 hours without touching cookie dough is up to you.  Personally, I’d probably cap it at three next time.  But either way, don’t pass up these amazing Pecan Joy cookies.
Pecan Joy Cookes
(adapted from Une Gamine Dans La Cuisine)
2 1/4 cups all-purpose flour
1 tsp baking soda
1/2 tsp salt
1 cup (2 sticks) unsalted butter, at room temperature
1 cup sugar
1/2 cup brown sugar
2 eggs, at room temperature
1 tsp almond extract
2 cups shredded coconut (sweetened)
2 cups chocolate chips
1 1/2 cups chopped pecans
Whisk together the flour, baking soda and salt.  Set aside.
In a separate large bowl, beat together the butter, sugar and brown sugar on medium-high speed until light and creamy, about 3 – 5 minutes.  Add eggs one at a time, beating for about one minute after each addition.  Add almond extract and beat to combine.
Add the dry ingredients to the butter mixture and blend with a large wooden spoon.  Mix in the coconut, chocolate chips and pecans, and stir to combine.  (Note: the dough will be quite dense.)
Cover the bowl and refrigerate for at least 3 hours.
Preheat the oven to 350 degrees and line baking sheets with parchment paper.
Use a rounded Tablespoon of dough for each cookie, and leave at least 1/2” between cookies on the baking sheets.  Bake for 8 – 10 minutes.  Let the cookies rest for about 2 minutes before transferring them to a cooling rack.