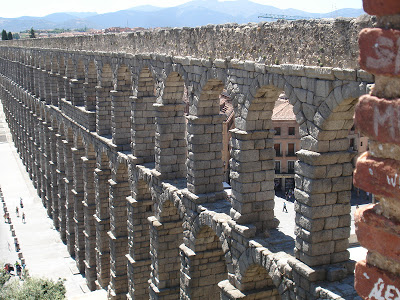 Last week I posted about the Roman Colosseum.  Today I’m writing about another Roman structure, built at the westernmost side of their empire – the Segovia Aqueduct in Spain.
The actual date the aqueduct was built isn’t known, but it’s estimated to have been started in the late first century. Although it has been repaired several times through the centuries, it’s still a testament to the brilliance of the Romans.  After all, it has been in use nearly 2000 years, carrying water to Segovia from a river in the mountains over 15 kilometres away. 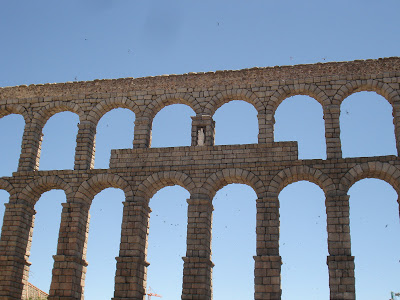 When we travel, we often seek out sites that have been protected by UNESCO.  All of the properties on their World Heritage list have been deemed to be of cultural or natural significance.  The Segovia Aqueduct is one such site.  When we visited, I thought about everything that has changed around the aqueduct while it has remained constant.  It was built to deliver drinkable water to a city, and for many centuries, it did exactly that.
I started thinking about all the ways that water has featured in our travels.  We’ve been to a rain forest, and to a place where it hasn’t rained in one hundred years. We’ve seen a lake where a famous monster lives and we’ve seen what happens if you disregard parking lot warnings about high tides. We’ve used water for recreation, transportation, and inspiration. 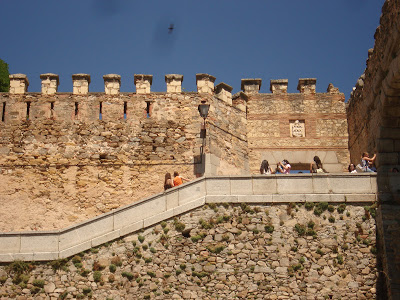 But at the end of the day, everything comes down to having enough clean water to drink.  Those brilliant Romans examined how other cultures provided water to their cities, and took it up a notch or two.  The fact that their aqueduct in Segovia is still standing is an engineering marvel and a tribute to their inventiveness.