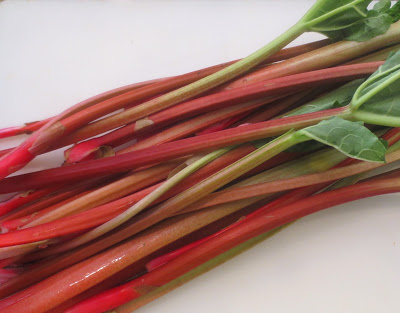 This week I made my annual road trip to the Stratford Festival with a few of my girlfriends. On the way there, we noticed a church hosting a “Baking and Plant Sale” in nearby Shakespeare (yes, that’s the actual name of the town). As we drove by, I saw big bunches of rhubarb for sale on a table in the parking lot. We talked about pulling over to buy some, but realized that leaving the rhubarb in a warm car for the day wouldn’t do it any favours. So we decided to wait and see if there was any still for sale when we drove home.

After strolling the streets of Stratford, having lunch, and seeing The Physicists, we drove back through Shakespeare. The table had moved inside the church. While there were still plants and baking available, the rhubarb was all gone. Seeing my disappointed face, the woman behind the table said, “We’ve got loads at home! I can get you some more.”

I laughed and said it was all right, but she told me she lived only a block away. And before I knew it, she had her husband on the cell phone, asking him to cut some rhubarb and bring it to the church. “I could have asked him to bring what we cut yesterday,” she said, “but that wouldn’t have been as fresh.”

And so it was that ten minutes later, her husband approached the church with a heavy plastic bag in his hand.  She asked me for $2, possibly the least expensive personal delivery of produce since William Shakespeare picked up his first fountain pen. (I convinced her to accept a little extra.)

That’s why I’m posting this delicious rhubarb crisp recipe today. I’ve put the rhubarb I didn’t use in the freezer, and I’ll enjoy this dessert again sometime when it’s out of season. 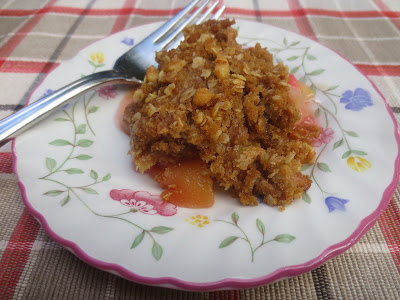 Rhubarb Apple Crisp
Filling
3 cups rhubarb, cut into 1/2” pieces
3 cups cored, peeled and sliced Golden Delicious apples, 2 – 3 large
1/2 tsp orange extract
1/3 cup sugar
1/4 cup flour
Topping
1/2 cup brown sugar
1 tsp grated orange rind
1/2 cup flour
1/3 cup rolled oats (not instant)
1/4 cup finely-chopped (not ground) walnuts
1/2 tsp cinnamon
pinch of ginger
1/4 tsp salt
1/3 cup cold butter
Preheat oven to 375 degrees. Butter a 2-quart baking dish and set to the side.
Measure the rhubarb, apples, orange extract, sugar, and flour into a medium bowl. Toss until combined and pour in the baking dish.
Place the brown sugar and orange rind in a separate bowl and combine until the sugar is scented with the orange rind. Add flour, oats, walnuts and spices, and stir to combine. Cut in the butter until the mixture is crumbly. Sprinkle over the fruit mixture and press down gently.
Bake at 375 degrees for 45 minutes, until the fruit filling is bubbly.