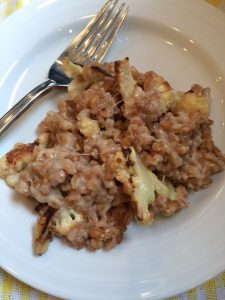 No matter what you do when you photograph it, it just looks … beige. And that’s a real shame when it comes to a recipe that tastes as amazing as this one.

You may remember that a few weeks ago, I discovered how delicious farro is, and how easy it is to prepare. So this recipe for farro risotto with roasted cauliflower and gruyere was next on my list to try. If anything, I like it even better, despite its rather pale and timid appearance.

So think about this meal as the equivalent of the wallflower at a party. It may not be the recipe that makes you do a double-take, but it just might make you happy for the rest of your life. 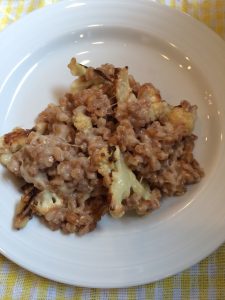 Cauliflower and Gruyere Farro Risotto
(from Eats Well With Others)

Spread the cauliflower on a parchment-lined baking sheet, and coat in 2 Tbsp olive oil. Sprinkle with salt and pepper. Roast for 20-25 minutes or until browned and crispy, tossing once halfway through. Set aside.

In a large pot, heat 2 Tbsp olive oil over medium heat. Stir in the shallot and saute for 3-4 minutes, seasoning with a pinch of salt. Stir in the farro and cook for 1 minutes, stirring constantly. Add 2 cups of broth to the pot, and lower the heat to medium-low. Cook, stirring frequently, until most of the water has evaporated. Add the remaining broth 1 cup at a time, only adding more when the previous batch has just evaporated, stirring frequently, until farro is tender. (Test after you’ve stirred in 5 cups of broth – you may not need to add more.)

Stir in the cauliflower and the cheese. Season to taste with salt and pepper. Serve warm.